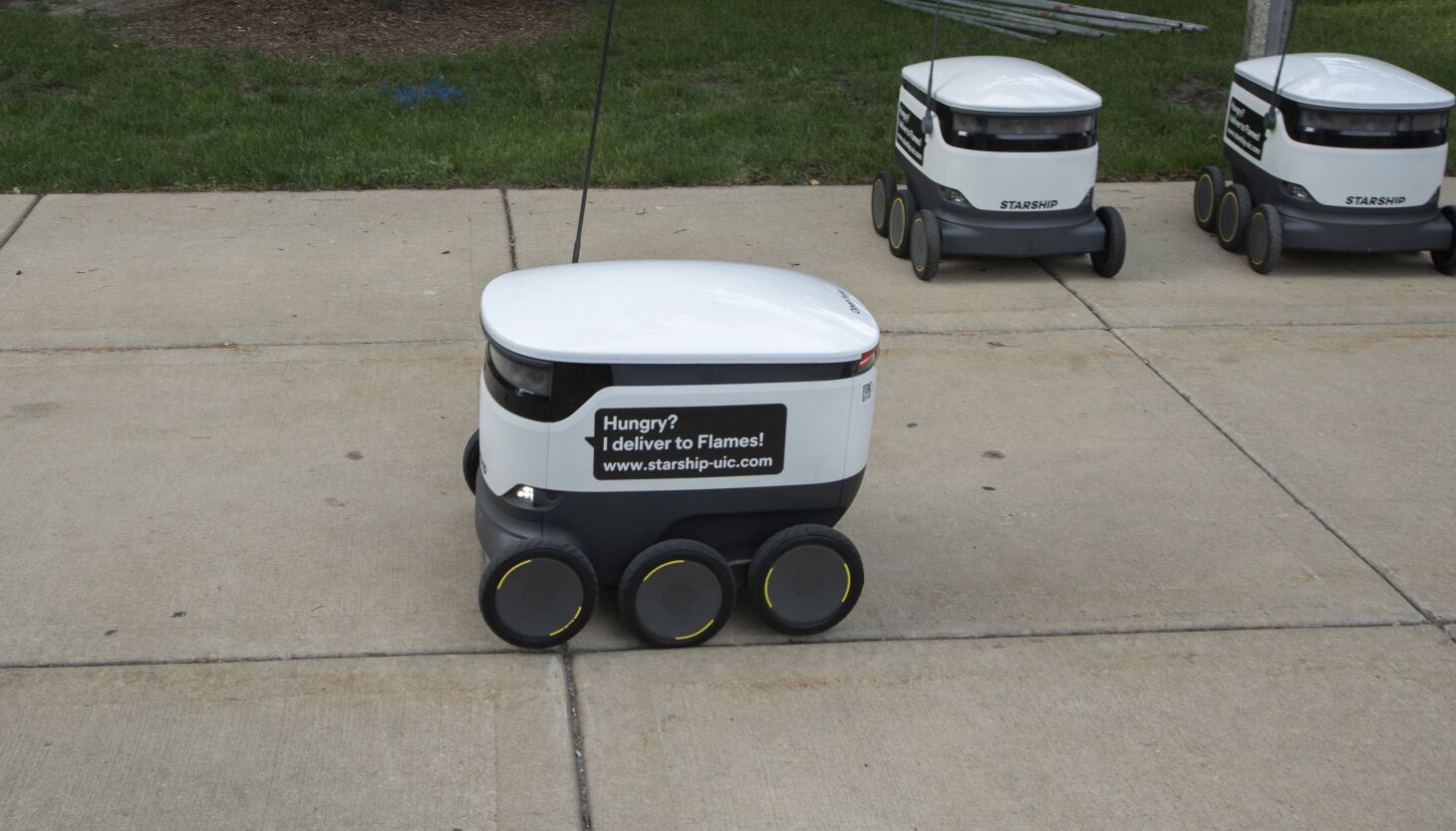 Robotic personal delivery devices described as “beverage coolers on wheels” will soon deliver more restaurant meals and groceries in and around the University of Illinois at Chicago campus.

Forging headlong into the future of food delivery, the City Council’s Licensing and Consumer Protection Committee on Thursday approved an order championed by Mayor Lori Lightfoot expanding an old pandemic-inspired pilot project. a year that had been confined to only part of the UIC campus.

Instead, Starship Technologies was allowed to conduct a two-year pilot project in an area bounded by Halsted Street, Ogden Avenue, Roosevelt Road and the Eisenhower Expressway.

Ryan Tuohy, director of communications at Starship Technologies, described the company’s robots as “beverage coolers on wheels”. They are confined to sidewalks and pedestrian crossings.

The top speed is 4 mph, “and only if there’s no one around,” Tuohy said. “That’s the maximum limit they’re allowed to travel. … And it’s a 75-pound light vehicle, empty. We don’t add a lot of weight.

“It’s a very careful device that will wait until it’s absolutely safe to cross” a street, Tuohy told the committee, claiming four million deliveries worldwide for the Estonia-based company.

“Robots don’t make high-risk decisions. They are much more patient than humans. When in doubt, they wait.

Licensing committee chair Emma Mitts (37th), who attended a back-to-school demonstration, marveled that robots were “smarter than humans. They make sure it’s clear.

To order food, customers download the app and enter the precise location, as long as it’s “within the geographies” – the boundaries – of the pilot program. Once the order is placed, customers can watch it make its way to their location.

When it arrives, “you open the lid, take your order, and you’re on your way,” Tuohy said. “Only the smart phone that paid for the goods is able to uniquely unlock the robot and release the goods from the robot.”

John Coronado, UIC’s vice chancellor for administrative services, said students, faculty and staff on the 34,000-student campus appreciated the “convenience and affordability” of the robot deliveries.

“If you remember what it was like to be on a college campus, it was never really easy to get food delivered,” Coronado said. “With the Starship app…the device comes directly to you wherever you are,” Coronado said.

When UIC entered into its partnership with Starship, the pandemic was “still raging”. The robot deliveries helped alleviate “the sheer volume of students” descending into UIC dining halls, Coronado said.

“The food goes into the device and straight to the students,” he said. “The devices have proven to be safe and reliable, even during the winter months.”

The expanded partnership will allow the robots to serve the newly opened university and residential complex where 600 students are housed, he said.

“Unfortunately, if it is not given the opportunity to grow, it will become impossible for Starship to continue operating at UIC, which would greatly impair the student experience that we have worked diligently to build,” said declared Coronado.

Charles Farrell, UIC’s executive director of business development, said the robots are delivering around 100 orders a week and after a slow start they have been “very successful”. The campus has 20 robots, and if the entire Chicago City Council approves the expansion, the plan is to add 10 more.

Al Pacelli owns Al’s Italian Beef, 1079 W. Taylor St., in the extended testing area, although he hadn’t heard of the program until contacted by the Sun-Times.

Pacelli was surprised at the mere thought of having his Italian beef sandwiches delivered by a robot.

“That doesn’t seem reasonable. And if you have to go upstairs or something. What if you had to take an elevator. Not everyone will meet you on the street. Are these things able to do that or go upstairs? It looks like the Jetsons,” Pacelli said.

When asked if he would be willing to try robot delivery, Pacelli replied, “Why not? We give everything a chance. This is how the world bounces back. Try it. And if that doesn’t work, I only lose a few customers. I won’t lose much.

If it works, the potential benefits of robots could be huge, Pacelli said. On the one hand, third-party delivery charges would reduce profits, Pacelli said.

“They charge us both. They charge the customer. They charge me too. This represents up to 30% of our costs, which is very difficult to manage. But, if you don’t, you don’t get any customers either. So you work at a lower volume and hope to get a lot of volume,” Pacelli said.

“You don’t have to tip them either. Unless they put a tip in there. I don’t know for whom. I know GrubHub, Uber and DoorDash – they put the tips right in there. Of course, it’s for a human.

DiBuono said the family restaurant doesn’t need any food delivery service. If a customer orders a meal, it’s take-out only.

“We are busy in the restaurant. And these types of orders are small. They’re just a bit disruptive,” she said.

“We get calls from all kinds of delivery services all the time. And we won’t meddle with them. … We only did it during COVID. And once we were able to get in again, we stopped him. So it really has nothing to do with us. Our bartenders do the take-out meals. And they are busy. They come in and go out. We don’t have the help to deal with this stuff.

She added: “It is very disruptive to have these services in a restaurant like ours. I could go a little further. But, I think it’s better if I don’t. … There were a lot of different people coming into the restaurant. … We have been here for 92 years. It’s kind of like, if it ain’t broke don’t fix it.

Illinois Restaurant Association President Sam Toia said he has been assured that robotic food deliveries currently confined to the UIC campus will be strictly regulated.

Toia also has assurances that the robots will be inspected by the Chicago Department of Public Health to ensure the futuristic devices are capable of keeping cold food cold and hot food hot.

Even so, Toia said he still had concerns.

“They told me the health department was working with these robot companies. We’ll see. Our concern is always the safety and health of our customers. Their response was, ‘They do it in Madison. They do it. in San Francisco. They’re doing it in Washington DC And we haven’t seen any foodborne illness issues. … I said, ‘I’ll listen to do a pilot program. Let’s see how it works.’ But I’ll be watching this very closely. It might be cheaper than using 3rd party delivery. But, I’m not sure yet.

2022-09-16
Previous Post: ‘Truly shocking and the first’ – Thai food stall staff were stunned when they received a $600 tip from the GrabFood runner
Next Post: The catering and catering contractor market is booming