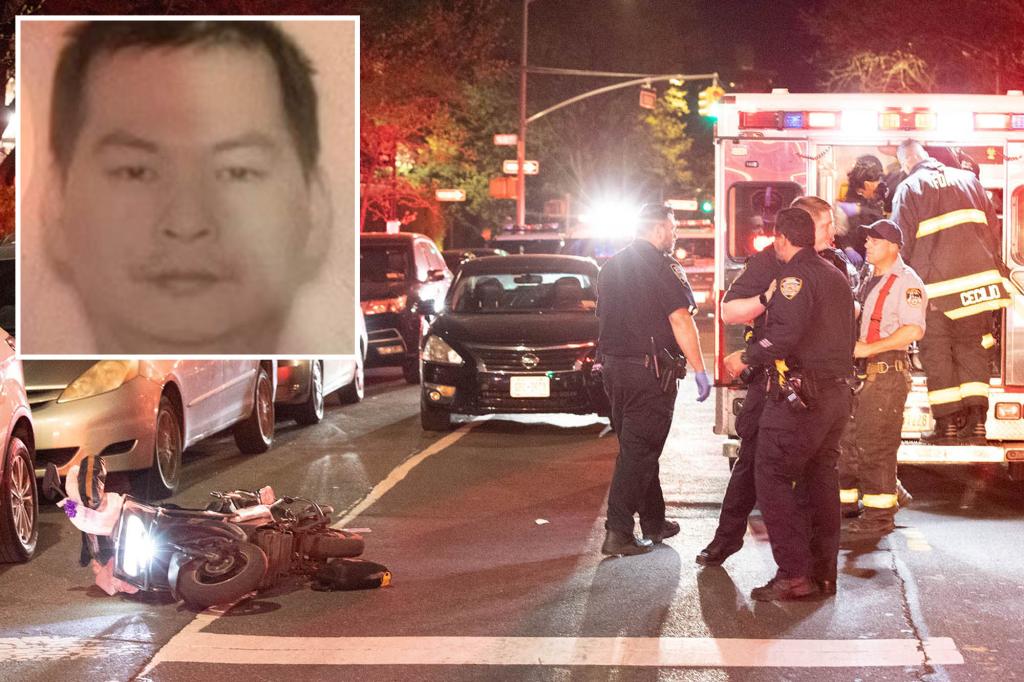 He may have been killed in beef stew over duck sauce.

The owner of the Chinese restaurant whose food delivery boy was fatally shot in Forest Hills told the Post on Monday that the disgruntled customer now wanted for questioning over the murder had previously been enraged by the amount of duck sauce he had received with an order.

“In November, he came to pick up his order. We have duck sauce, help yourself,” Yang, 53, said through an interpreter. “He takes everything, full bin, full bin. He takes his order and leaves. He came back and said angrily, ‘I need more duck sauce.’ I say, ‘OK, OK, it’s here. Help yourself.’

After that, “my car starts[ed] be damaged,” Yang said.

Yang said the crazed customer was knocked to the ground by employees during the gun incident.

Among those who took on the violent boss was Zhiwen Yan, the 45-year-old delivery man shot dead on Saturday night, the owner said.

But despite repeated calls to the police over time about the angry client, the client was never charged, Yang said.

“I call so many times,” the owner said.

The NYPD would not say if the man was arrested during any of the encounters, noting that he was not arrested in Yan’s death. The Post is withholding the customer’s name because he has not been officially named as a suspect or person of interest in the murder.

A police source said he had at least one arrest dating back to 2001 for armed robbery in Queens.

Sooi Chung, 70, a longtime Great Wall worker, confirmed Yang’s account of disturbing encounters with the angry customer and recalled how the man had only become bolder and more dangerous over time.

“Sometimes he was waiting outside,” Chung said. “He would say to the boss, the delivery guy and one of the chefs, ‘I remember you. I remember you.’ “

It wasn’t clear if the delivery guy he spoke to was ever Yan.

Chung said the harassment finally ended when workers reported the gun incident to cops in January.

Police are now investigating whether Yan was targeted by the client, with detectives looking to question the man, according to police sources.

Yan, a married father of three who emigrated from China about 20 years ago, was making a delivery near 108th Street and 67th Drive in Forest Hills around 9:30 p.m. Saturday when he was shot in the chest and dropped his scooter.

Law enforcement sources said the description of the vehicle fleeing the scene of the fatal shooting matches that of the client’s car. Both vehicles are the same model, color and general year – an older gray Lexus RX3 SUV.

Yan was rushed to Elmhurst Hospital, where he was pronounced dead.

The shooting occurred about 800 meters from the restaurant. The customer has an address the other way around, about 2 miles from the restaurant, but also possibly another locally, although the location is unclear, some of his neighbors told the Post.

People in the building next door to the restaurant boss described it as a problem on Monday.

“I call it ‘the Terminator,'” said a construction worker. “He goes in and out quickly. We had problems with him. He always wears those wraparound black sunglasses.

“He’s a hoarder,” the worker added. “He was grabbing people’s packages, and when they called him, he argued, shouted, denied. We have cameras all over the building.

Meanwhile, the Great Wall restaurant was closed for the second day in a row on Monday – with Yang saying: ‘We won’t be opening until [Yang’s killer] is captured.

A memorial for the beloved slain delivery man has sprouted outside.

“My wife and I were talking to him on Saturday night at 5 or 6 p.m., just before he was killed,” said Jerry Kwok, a neighbor who had known Yan for about 11 years. “He smiled and asked about my children.

“I’m still in shock,” said Kwok, 53. He was so nice. He would be so friendly with everyone. It made him happy to help people.

“Why did this happen to him? Father of three children,” he said. “What will happen to his children? This is so bad. The city is going crazy.

Others, including community leaders, gathered outside the restaurant on Monday to mourn Yan’s senseless death.

“Security is the biggest concern for Asian American communities,” Dany Chen, founder of the Chinese-American Justice Alliance, told The Post.

“This incident in Forest Hills came four days after another shooting at Fresh Meadows. Asian neighborhoods are in panic. Something must be done.”

According to NYPD statistics, major crimes in the 112th Precinct, which covers the neighborhood where Yan was killed, are up nearly 48% so far this year compared to the same period last year.

On Sunday, there have been two murders at the compound so far this year, compared to none last year, and 32 felony assaults compared to 20 during the same period in 2021.

Robberies in the region are also up, at 25 so far this year, from 16 in the same period last year, statistics show.

2022-05-02
Previous Post: Food delivery man gunned down on Queens Street
Next Post: The owner of a major DC restaurant cuts all ties with food delivery apps