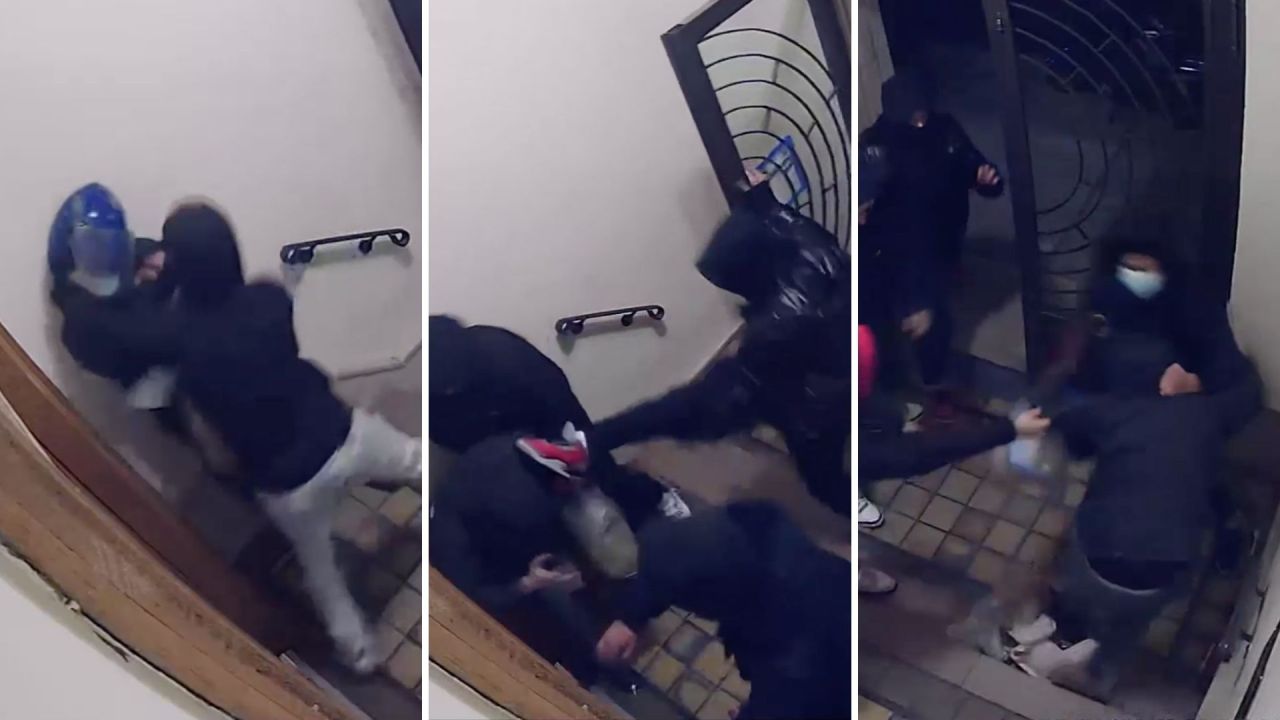 INWOOD, Manhattan (PIX11) – The group seen on video brutally robbing a delivery driver on February 6 have been involved in at least six other incidents since the start of the month, police said Saturday.

The group – believed to number between four and seven people – first attacked outside 10 Park Terrace East on February 3, police said. About seven people approached a 40-year-old man around 5:17 p.m., pushing and kicking him several times in the body and head.

After assaulting the first victim, police said the group stole the man’s cell phone and about $20 in cash before fleeing on foot south,

The victim was treated at the scene for his injuries.

Three days later, four members of the same group brutally attacked a delivery man in the lobby of a Manhattan apartment, police said.

The NYPD said the 50-year-old delivery man showed up around 8:45 p.m. to deliver an order at an apartment building in Inwood on Cooper Street, between West 204th and West 207th streets. As he waited in the vestibule between the doors, the suspects followed him through the front door of the building, security camera footage shows.

One of the men suddenly lunged at the worker as the other attackers began punching him in the face and kicking him. Soon, all four beat him and then finally knocked him to the ground, authorities said.

According to police, the group stole approximately $200 in cash from the delivery man’s front pocket before fleeing on foot to parts unknown. The victim reported no serious injuries in the attack.

The NYPD said the same group of seven suspects struck again around 7 p.m. on February 8, once again outside Park Terrace East. A 32-year-old man who was walking in a park was approached by the suspects, who punched the victim multiple times. The victim had his headphones and mobile phone stolen following the incident.

The victim suffered minor injuries after the assault, but did not require medical attention, police said.

A group of four suspects approached another victim, a 30-year-old man, three days later around 4 p.m. The victim was walking on Harlem River Drive when the group accosted him and demanded possessions, police said. The thieves made off with the victim’s wallet, which contained several credit and debit cards.

A 20-year-old man entering Inwood Hill Park around 6 p.m. on February 15 was approached by the same group of seven violent robbers, police say. The suspects kicked and punched the man until he fell to the ground, stealing his mobile phone, sunglasses and jewelry after the attack.

The victim of this incident suffered minor head and knee injuries and was taken to a nearby hospital for treatment.

A group of four suspects struck twice more, once on Feb. 18 and again on Feb. 21, according to the NYPD. Both incidents involved delivery drivers.

On February 18 at around 6:40 p.m., a 20-year-old man delivering food at 86 Thayer Street was accosted by the four suspects while in the lobby of the building. Police said two of the suspects displayed sharp weapons, while the others stole the man’s phone, headphones, keys and cash.

Police have released new footage from the February 18 incident.

The last reported theft took place around 9:55 p.m. on February 21, in front of the same building on rue Thayer. Police said a 49-year-old man was delivering food there when four individuals came out of the building and displayed knives.

Police say the suspects took about $86 – and the food order – from the victim before fleeing east.