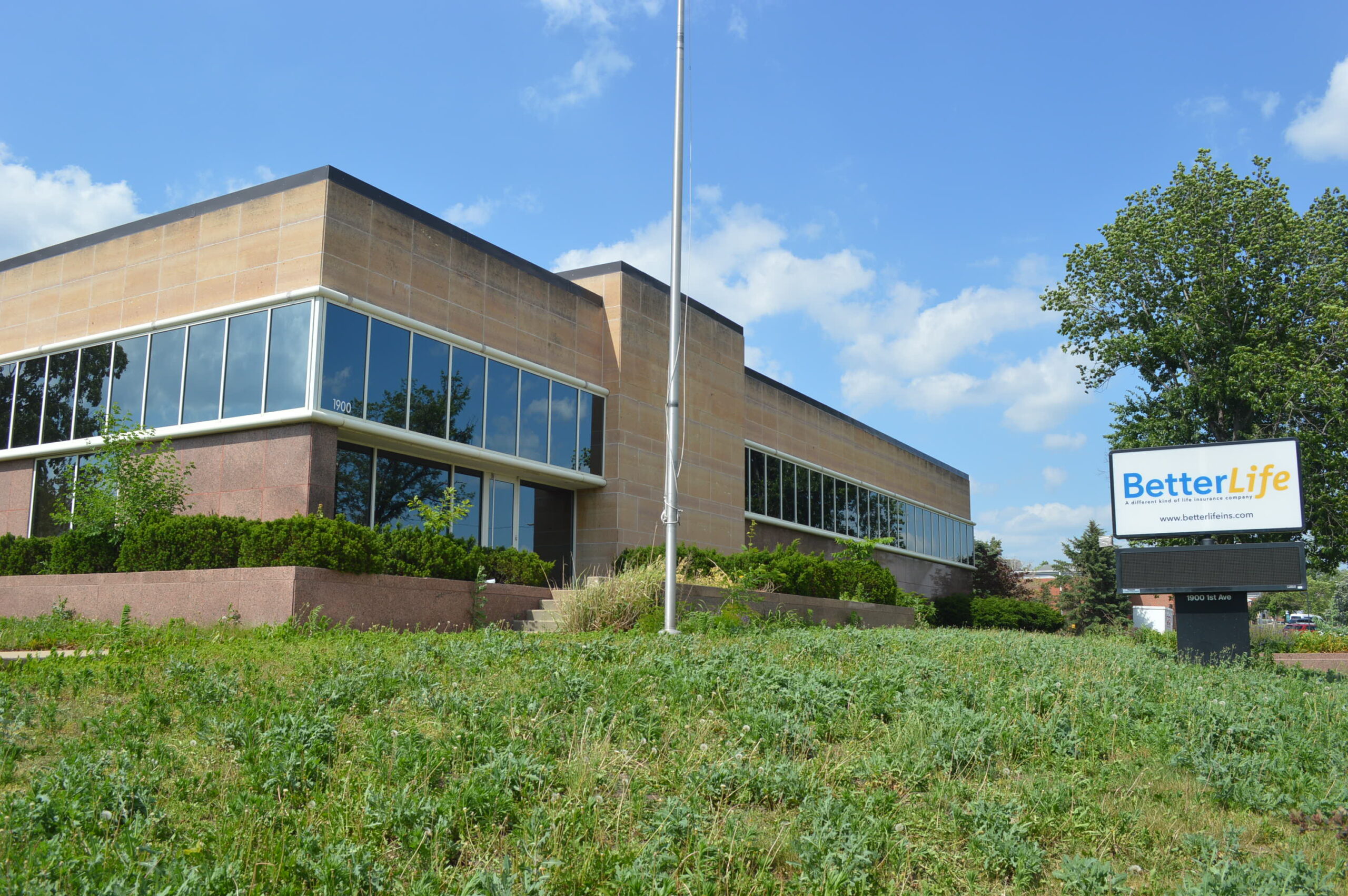 CEDAR RAPIDS, Iowa — Plans are underway to turn a site where neighbors came out in force against a proposed convenience store into the headquarters of Eastern Iowa Food Service and a Dunkin’ store.

The former BetterLife Building, 1900 First Ave. NE, built as the headquarters of the Western Fraternal Life Association in 1958, would have been demolished according to plans by Kwik Star, which had proposed a convenience store and car wash on site.

Neighbors circulated a petition and showed up at meetings to oppose the convenience store, which reportedly operated 24 hours a day, seven days a week, with gas pumps and a car wash.

Instead, as first reported by Corridor Urbanism, the building will be redeveloped, with a Dunkin’ franchise on the top floor, which has direct parking access, and offices and a bakery on the lower level.

Constructed with five types of stone, the building has 7,500 square feet on each of its two levels. Then known as ZCBJ – for Západní Česko-Bratrská Jednota, or Western Bohemian Fraternal Association, the building opened in a three-day ceremony when it was inaugurated in 1959. The association provided insurance- life and a social connection with the Czech/Gypsy origins of the members. The Western Fraternal Life Association, as it was later called, became BetterLife and moved its headquarters to Madison, Wisconsin in 2021.

Interior features include durable terrazzo flooring in the entrance hall, various tile patterns in the washrooms and kitchen, and stair railing details.

“It makes economic sense to save a building,” Farley said, citing demolition costs and materials for new construction. “It is extremely expensive to construct a building of lesser quality and beauty. This building would cost a fortune to tear down and it’s beautiful, so we thought, ‘Let’s make it work’.

Eastern Iowa Food Service had previously repurposed a Sonic building in Coralville as a Dunkin’ store, for example, while the mid-century BetterLife building not only made economic sense to keep, but had history and character that added to her allure, she said.

Farley said the Cedar Rapids site will be the first-ever headquarters for Eastern Iowa Food Service, which has a separate division, Reif Oil Co., based in Burlington.

She confirmed that there were no plans for a convenience store at the Cedar Rapids site.

In addition to offering the Dunkin’s menu of breakfast sandwiches, donuts, beverages and more, the building will serve as a dedicated training site.

“We’ve never had a training facility, so it will be exciting,” Farley said, adding that plans are for an opening in 2023.

These plans include a Dunkin’ drive-thru.

Seth Gunnerson, zoning administrator for the Cedar Rapids Department of Development Services, said the city has reviewed a concept for the site, but has not received any development applications to date.

Gunnerson said the property, zoned Traditional Mixed-Use Center, or T-MC, would potentially not require a public hearing process if the development conforms to the existing zone district and meets all current development standards.

“Because an administrative site plan has not been formally submitted for review, we cannot say with certainty whether this project would require a public hearing,” he wrote in an email. “It is possible to develop the plot as described without a public hearing.”

The uses described in the Department of Developmental Services for a restaurant, office and commercial bakery are all permitted in this area district, Gunnerson noted, with ancillary drive-thru also permitted.

City code requires that a drive-thru be located at the back or side of buildings in traditional neighborhoods to maintain pedestrian access from the street.

“Because the uses are permitted, there would be no public zoning process unless they wished to request a design exception to development standards,” Gunnerson wrote. “Based on our review, their project is likely planning permission with site plan review for the car park improvement, but we are waiting for them to send us more detailed plans for review.”

Staff review and approval of the administrative site plan would be required before any building permits would be issued.

Gunnerson added that the formal public participation process to be used at the site took place when it was zoned T-MC during the citywide rezoning process, or when the parcel was originally zoned commercial. under the previous zoning code.

According to the city assessor’s office, the site sold for $1.3 million at the end of last month.

The property includes a natural fieldstone wall, which was once part of an estate, which the city’s Historic Assets subcommittee requested be included on the Cedar Rapids Historic Assets List. The site also includes the former 1960s Reorganized Church of Jesus Christ of Latter-day Saints building behind it – later Odd Fellows Hall – and a large vacant lot next to both buildings.

Farley said there are currently no plans for the church building. The number of parking spaces needed will depend on city code, she said, citing property grading as the main challenge at the site.