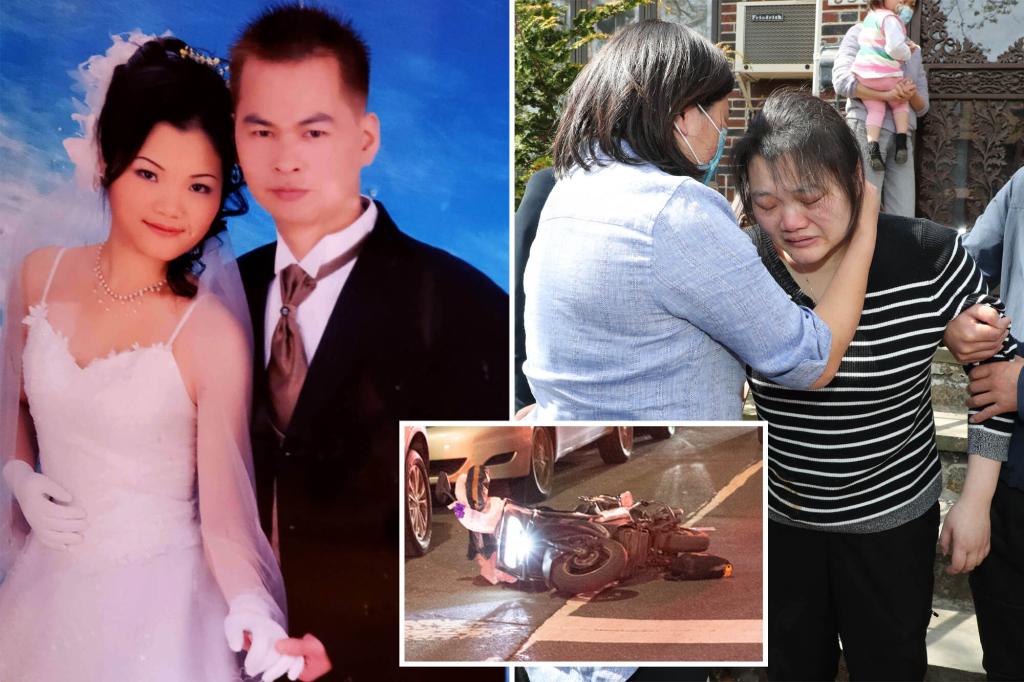 A hard-working Chinese food delivery man was shot and killed while on the clock in Queens on Saturday night – and now cops are investigating whether the shooter is a disgruntled customer who had ‘multiple disputes’ with the restaurant about his orders, sources told the Post. .

Zhiwen Yan, 45, was on his scooter making a delivery near 108th Street and 67th Drive in Forest Hills around 9:30 p.m. when he was shot in the chest and fatally injured, police said Sunday .

Sources said cops are now watching a 50-year-old client who had a dispute with Great Wall staff on Queens Boulevard, allegedly threatened them with a gun in January and twice vandalized their vehicles.

A witness told police the angry customer drove away from the Forest Hills restaurant in an older model Lexus RX3 SUV after an encounter – the same type of vehicle spotted fleeing the scene of Saturday’s shooting, the sources said.

No arrests have been made in this case.

“He was a father of three who worked three jobs – all food deliveries,” the deceased’s nephew, who identified himself as Michael, said Sunday outside the family’s Middle Village home.

“He came here in 2001,” he said. “He has been in this country for more than 20 years. I would like to know why this murder took place. I would like to find out the truth and obtain justice. It was a brutal murder.

“It’s unacceptable that this happened,” Michael added. “It’s a very peaceful community. It never happened, this kind of problem.

Yan’s devastated widow, Eva Zhao, burst into tears after walking out of the house – the couple’s young daughter in the doorway behind her.

Yan, of Queens, was found unconscious at the scene after police responded to a 911 call and rushed to Elmhurst Hospital, police say.

He was pronounced dead in hospital.

According to a GoFundMe page released on Sunday for Yan’s three children, the shooting was “an act of road rage” while he was on delivery for Chinese restaurant Great Wall.

“He punctured the boss’s tires once. And one night in December or January he pointed a gun at my boss,” Chung said. “We reported him to the police and he stopped bothering us.”

A memorial began to sprout outside the restaurant, which was closed on Sunday, with mourners leaving flowers outside.

“He always had the order with him,” Sooi Chung, 70, who worked with Yan at the restaurant, told The Post. “When he was shot, the police found the bag with the food with our menu inside.”

“We are very sad,” Chung said. “Everyone loved him. We just don’t know what happened to him. He died young.

“He was super nice and worked so hard,” former neighbor Yang Pan, 20, said of the man killed on Sunday. “I would never see him not working.

“When I spoke to him he was always nice and he was laughing,” said Pan, who lived in the same Elmhurst building as Yan until his family moved.

“I felt like I had a heart attack when I found out he was dead. I can’t believe it,” she added. “It’s so sad. I am heartbroken.”

“It’s my neighborhood. They are my neighbors,” Meng said. “People are terrified that this could happen in the middle of a relatively safe neighborhood in Queens. And so people are really scared.

In a statement, Councilwoman Lynn Schulman denounced the murder.

“This incident sent shockwaves through our neighborhood, which is considered one of the safest in Queens,” the statement said. “The fact is, gun violence is an epidemic in our country and it has touched every corner.”

Yan emigrated from China more than 20 years ago and delivers for the restaurant seven days a week, the GoFundMe page says.

Cops are now scouring the neighborhood for surveillance footage of the shooting.